I love the NHL and Transformers, so I’m pleased to mashup both here. There are so many teams in Transformers (like the Constructicons and Aerialbots), it makes for a good overall fit.

Detroit fans, I apologize in advance, but the Junkions are what kickstarted this whole thing. Plus they’re the only Transformer with a very distinct wheel.

UPDATE (August 8th 2015): Several teams have been updated, while a few (DAL, WASH, PIT, PHI) have been given new identities. I will probably keep updating these every once in awhile.

Here are some of the old ones and a few unused ones too, 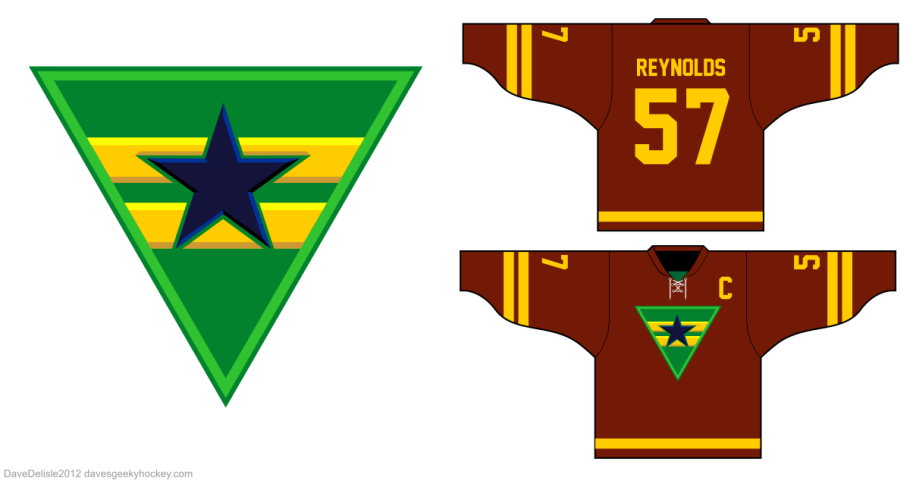 This is a design for a Browncoats jersey, which is based on this old Boston Bruins jersey. I know the orientation of the main logo may be subject to debate, but it looks better with the triangle pointing down and the star up. This orientation is similar to the San Jose Sharks/Pittsburgh Penguins/Anaheim Mighty Ducks logos, all of which are also triangular in shape.

Above: Tim Thomas (left) and Alexander Ovechkin. I chose Thomas because he always appears to be smiling like that.

As you know I love LEGO about as much as I love hockey. Oddly enough, I only have one LEGO item in my possession: a hockey player minifig from a few years back. As you can see, that figure looks more like a football player, with the cage mask and shoulder pads.

LEGO could’ve done better with that minifig. It just needed a simple helmet and clear plastic visor, like LEGOvechkin up there. It would be like a car racer or astronaut helmet sans chin strap. In LEGO’s defense, they probably felt compelled to add accessories, hence the football shoulder pads.

Saying that, I feel a line of minifigs based on NHL players would be awesome. Of all the sports, hockey would translate best to LEGO. Because at a passing glance, a minifig with a helmet and stick is so readily identifiable as a hockey player.

I’m sure you are currently saying something along the lines “What are you rambling on for, Dave? WANT. Gimme gimme gimme!” I would love nothing more than to make these toys a reality for you. While you could probably make a skater easily enough with existing parts, a goalie would require many unique parts: 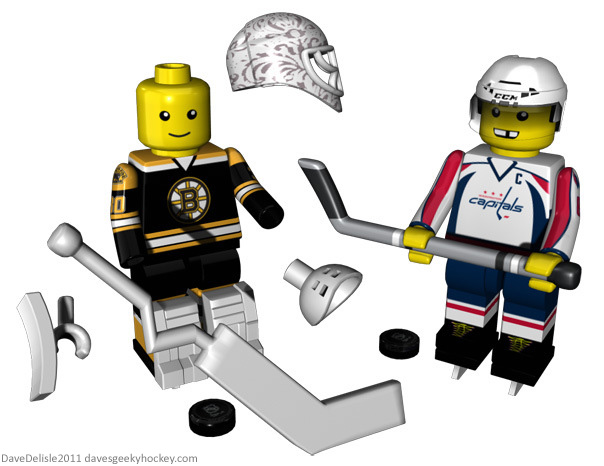 Unique hand pieces, stick, helmet, and pads. So LEGO or a third party company would have to make these molds.

One thing I should mention, is that actual LEGO NHL minifigs wouldn’t look this detailed. They usually just apply a decal to the front and back of the torso, and that’s it. No wraparound graphics. At least you’d have the team logo on the front, and name/number on the back. Additional decals could be added to the arms and legs.

Also if you check out that goalie stick, I made a bend so the hand can grasp it. An actual NHL goalie did this as well (just 2 bends not 3, looked like this), which was genius because he didn’t have to turn his wrist to hold onto the stick. This was an 80’s/90’s goalie. Anyone recall who?

So how can we get these made? Write a letter to LEGO? The NHL? The NHLPA? I’d say none of the above. I believe the answer is McDonald’s Canada, which has done many promotions with LEGO toys and released numerous NHL collectibles over the years. Sadly they don’t have an e-mail contact but you can call them or send snail-mail. Details here.

Here is hoping these see the light of day eventually.

Hi there, my name is Dave Delisle, and you may know me from Dave’s Geeky Ideas. I started that blog to cover a wide array of topics, and I will continue to do so there. Dave’s Geeky Hockey (which is unpleasant to say aloud) will function as a companion blog of sorts. Its purpose: all things hockey for the geeks who want to taint* the game.

The second blog is because my love of geek culture began to assimilate another love of mine – hockey. This resulted in many geek/hockey abominations*, mostly in the form of hockey jersey designs. Redditors then clamored for these designs, and Rinkgear was able to cater these team orders.

The hockey jersey orders were taking over in popularity, to the point where I’m starting to plot a course for orders which would take place months from now. It’s always troubling (and painful) when I have to think that far ahead.

This blog will be dedicated to geeky hockey jersey designs, jersey team orders, hockey ideas, and the odd hockey rant. All the announcements, news, and updates regarding jersey orders will take place here. Bookmark this site — make it so.

It looks pretty sparse right now – lotsa blank space. I’ll get to the design eventually! I have a look in mind that will engage visitors.

*The negative connotations were inspired by a comment someone made of my jersey designs elsewhere on the interweb: “HOCKEY IS NOT GEEKY!” — challenge accepted.