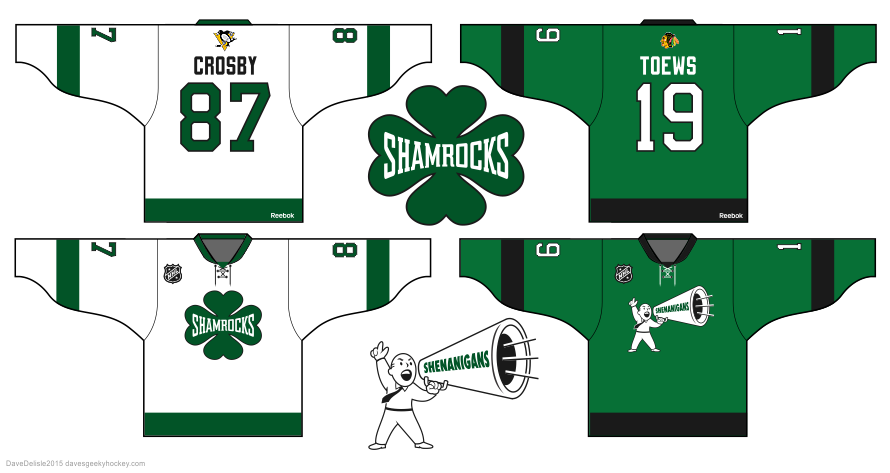 As the title suggests, this isn’t a design post exactly, more like a general idea. In light of this year’s weird take on the NHL All-Star jerseys, I thought I’d put forward a new concept, where two unique team identities are created solely for the All-Star game.

The two teams would adopt fun nicknames that pay tribute to the host city. For the example above I chose Boston, so the teams would be the Shamrocks and Shenanigans (note: I goofed, thought House of Pain was from Boston, they’re actually from New York). If Toronto was hosting, team names would be something like the Yorkton Bullies and the Queen Street Trolleys.

The team identities would happen regardless of format (East Vs. West, North America Vs. World, Captain Vs. Captain), so there may be some subtitling: Eastern Conference Shamrocks, or Captain Crosby’s Shamrocks, etc.

The NHL shield would get bumped up to the right chest or shoulders. I’d also like to bump the Reebok logo to the hem, and put the team logo above the player’s name, but there is no way Reebok would ever permit that.

With a couple of solid team designs, I feel these jerseys would have more appeal with fans in all NHL markets than the current NHL shield jerseys.

Note: why not a few geeky designs for All-Star jerseys, like Star Wars or DC Comics? I don’t think any NHL team would go for that, to be honest. But with the All-Star game the NHL has shown they’re willing to experiment with jersey designs, so a couple of sporty/beer league designs seem more plausible.