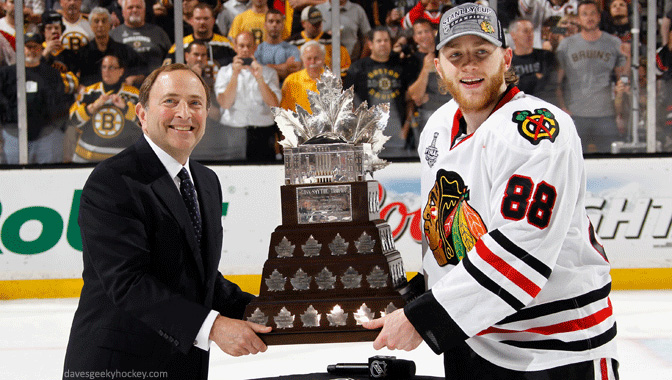 With the 2012 All-Star Game looming, the validity of the game will be debated by the hockey media (as is customary). Should it be cancelled? Is the format good? Who is attending? Who was snubbed? And so on.

I won’t join the debate. I’m of the opinion the game is more for kids, because I enjoyed the game a great deal more when I was a kid. Seeing all the NHL stars together was like watching a collection of hockey cards come to life — a somewhat surreal sight. But now it’s old hat, and the novelty of watching these guys play a casual game of shinny is no longer a must-see affair – at least to me.

And then there is the NHL Awards Show, held in June a few weeks after the season has concluded. It’s really a lavish event, as though the NHL was trying to mimic the Oscars. I don’t think any other pro sports league does this, and that makes this awards show seem all the more unnecessary.

For my idea, I’d like to see a combination of the two events, held after the NHL season has ended. The All-Star game would now be a postseason event, much like the NFL’s Pro Bowl. The formal awards ceremony would be scrapped altogether, instead the hardware would be handed out during the All-Star game.

The primary purpose for this merger is to award all the trophies to players while they are in uniform and on the ice. It would be exactly like handing out the Stanley Cup and Conn Smythe Trophy (as seen above) at the end of the playoffs.

All the awards could be handed out at the end of the game, or throughout. The presentations would be at ice level, and the players would collect their awards and maybe do a lap around the rink with the trophy (well, I would!). The Coaches and GMs would also be awarded their trophies at ice level too.

Seeing the players collect their hardware while in uniform would mean a little more to their fans – especially as a consolation prize for an early exit from the playoffs (or not making the playoffs at all). This would also look better on a hockey card than a player in a fancy suit.

Having the All-Star game after the season would make for a nice swansong. It’s one more time to see the players in action before the 4-month offseason starts. Plus the casual shinny-like atmosphere of the game would be more acceptable in the postseason than being bookended by high-stakes games in the middle of the regular season.

While this sounds very ideal, I’m sure the NHL would prefer to have two separate events than one mega event. But now that the Winter Classic has taken the mid-season crown jewel away from the All-Star Game, the NHL can now afford to examine this idea.

I’d like to include the NHL Draft as part of the festivities too, but I think Canada would come to a grinding halt. The reality is there has to be a bit of a buffer for the NHL Draft, because the roster freeze ends prior to the Draft. You don’t want to trade a player hours before or after the All-Star game he just played in.